Finding comfort in vulnerability: How a spine metastasis patient approached his diagnosis

The spine is a common site for cancer to metastasize (spread). In fact, research shows that between 30 and 70 percent of people with metastatic cancer will experience a tumor on their spine.

Unfortunately, it is also common for people to be unaware that they have any cancer at all until it has spread from the primary site – perhaps the lung or breast — to the spine.

This was the case for Chad Eddy of Wake County, NC, who was feeling fine until a nagging back pain started. His X-rays looked normal, so he tried physical therapy.  The pain only got worse, until he was at times unable to walk. Finally, an MRI showed masses on his spine and a broken vertebra. 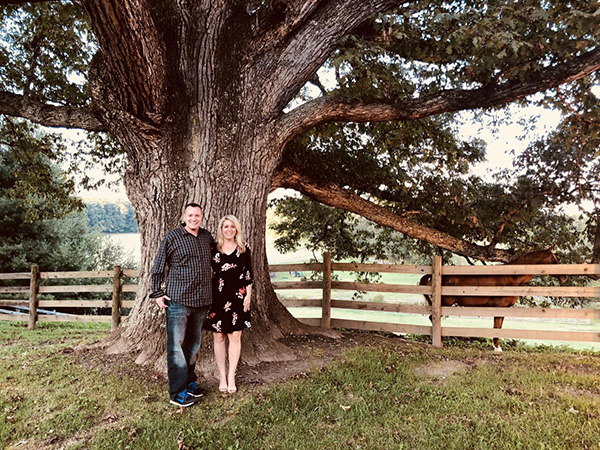 Follow-up appointments were scheduled, which would not be kept. Chad explains: “I woke up one morning and a voice in my head screamed, “GET YOURSELF TO A HOSPITAL NOW.” He and his wife, Missy, called for an ambulance, and asked the paramedics to take him to Duke. “Suddenly, I felt like I was going to be taken care of,” he says. “I had never been to Duke, but I knew that it had a national reputation.”

At the emergency department at Duke University Hospital, Missy gave Chad’s MRI scans to Michael O’Keefe, MD, an emergency medicine physician. Chad remembers O’Keefe telling him, “We have a neurosurgeon upstairs, we’re connected to the top people, and we’re going to work fast on this.” Chad and Missy felt relief. “That was the first time anyone said we’re going to move fast,” says Chad. As they mentally prepared to face surgery the next day, they were shocked once again to learn it would happen in just three hours. 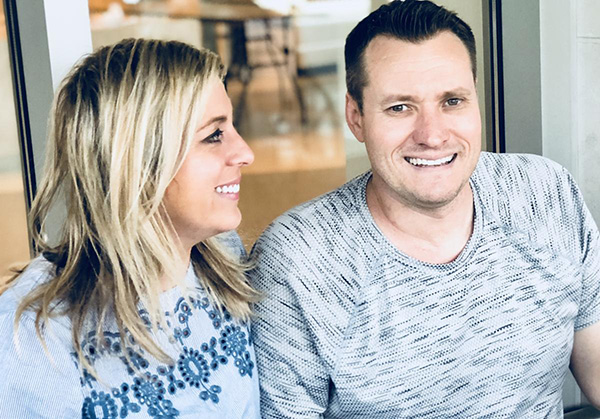 Duke neurosurgeon Rory Goodwin, MD, PhD, was on call when Chad and Missy arrived at the ED. Goodwin is co-leader of the new Duke Center for Brain and Spine Metastasis and specializes in treating tumors of the spine.

Chad said Goodwin immediately put him at ease. “He walked in and told me not to worry, that they were going to do what they needed to,” says Chad. “His confidence was so comforting.” Missy felt the same. “If there’s one person you want on your team, it’s him,” she says.

In a six-hour surgery, Goodwin removed the tumor and performed a spinal fusion by placing a cage between two vertebrae. It was after the surgery that Chad and Missy got the diagnosis: He had stage 4 non-small cell lung cancer, caused by an EGFR mutation, that had spread to his spine. 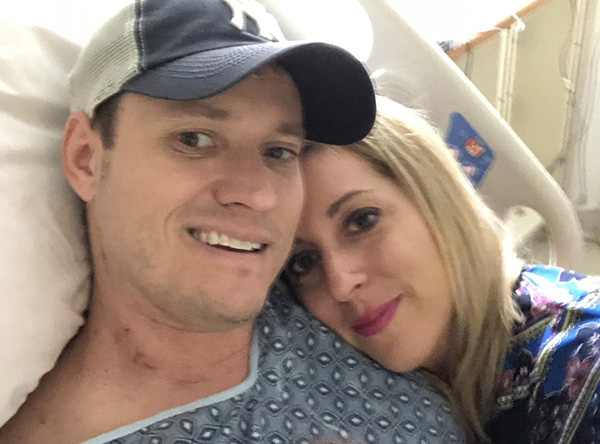 A few days after surgery, Chad was up and walking, determined to start down the road to recovery. The surgery was followed by targeted therapy (osimertinib) and radiation treatments. Meanwhile, Chad, a former athlete, went from walking to running for short intervals. He and Missy never stopped living their lives. “Six weeks after the surgery, I packed him up and took him to the beach,” says Missy.

His last scan, six months after surgery, showed one small spot left on his lung.

“God blessed our family and worked some miracles through the skilled professionals at Duke,” says Chad. “We’ve learned to appreciate life at a new level, and we’ve learned that we have to be vulnerable and allow people to help. When we got to Duke, I was able to let go.”