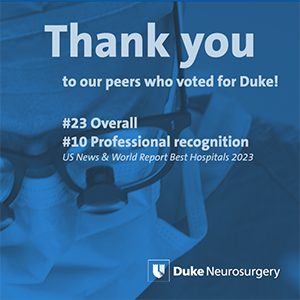 Duke Neurosurgery and Duke Neurology have been ranked #23 in the country by U.S. News & World Report, which released its annual hospital rankings today.

Duke University Hospital also remains the #1 hospital in North Carolina and #1 in the Raleigh-Durham metropolitan area.

Rankings consider patient outcomes, technology and other care resources, and reputation among peers, among other factors. Based on reputation alone, Duke Neurosurgery ranks #10 in the country.